Guinelle (Japanese ギネル) is one of the many Legendary Rastas found within Mezeporta Square. He specializes in using the Hammer. 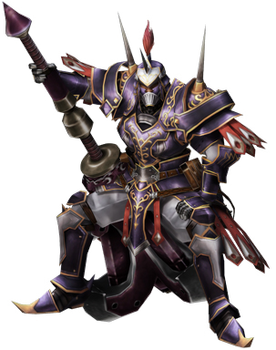 Guinelle has a questionably rash personality. He speaks in a way that really shows off his old, angry age.

Undoubtedly one of the oldest known hunters, Guinelle has seen many hunts in his days. However, his reckless behavior has put him in some bad situations. These situations include having a drinking contest with Natasha about which weapon is better, being knocked out with a single swing of Circa's Hunting Horn, jeopardizing the mission at hand, and even being kicked out of the Hunter's Guild at one point. Despite these short comings, he has proven himself to be a very strong and wealthy hunter. He has hunted up to three hundred Khezu and has even slain Zerureusu. He has also helped Leila, when she had lost her boyfriend. Guinelle also lives in his own personal mansion.

Guinelle usually wears Harubada F and he is known to use a variety of Hammers.

Retrieved from "https://monsterhunter.fandom.com/wiki/Guinelle?oldid=748978"
Community content is available under CC-BY-SA unless otherwise noted.