Gypceros is a Bird Wyvern introduced in Monster Hunter. 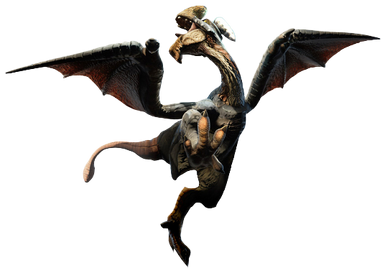 Gypceros is among the largest and heaviest known Bird Wyverns. Its most notable features are the lamp-like crest on top of its head and a rubbery, shock-resistant hide. It has a long pink tail with a bulbous tip, and is a uniform blue-grey across most of its body. It possesses a poison sac which allows it to produce toxic fluids for use against attackers.

Gypceros can use its luminous crest to produce dizzying flashes and temporarily disorient foes. Its elastic tail can extend and be used as a whip, and it can spit large globules of poison to intoxicate attackers. Due to its shock-resistant hide and flashing crest, it is immune to both shock traps and flash bombs.

Gypceros is a naturally timid wyvern. However, it is rather intelligent and crafty, as evidenced by its willingness to feign death in order to draw a foe in for a surprise attack.

Gypceros is usually found in swamps and marshlands, although it can occasionally be seen in jungles and open grasslands.

HC Gypceros has poison stains on its face and oddly larger tipped tail and new behavior and attacks. It's able to spit poison that sits in place like a short pillar until it fades.

HC Gypceros is known to pull even more astounding fake outs than average Gypceros showing its intelligence in observing how hunters use status attack weapons. Its been seen to fake paralyzed and fake sleep along with its famed playing dead act.

It will chain these acts into combos with its attacks such as faking sleep then instantly starting a flash to blind hunters followed by a new long reach tail attack.

For details on older games this monster has appeared in, see Gypceros Guides.

Retrieved from "https://monsterhunter.fandom.com/wiki/Gypceros?oldid=831085"
Community content is available under CC-BY-SA unless otherwise noted.