Hallowed Jhen Mohran is an Elder Dragon and a Subspecies of Jhen Mohran introduced in Monster Hunter 3 Ultimate. 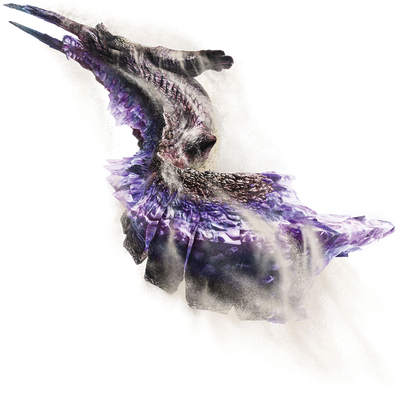 This subspecies is slightly bigger than the common species.  It is also colored differently, with a deep violet ore covering its body as opposed to the sandy hide of the Jhen Mohran.

This subspecies is even stronger and more formidable than the average Jhen Mohran. It can both withstand and cause a higher amount of damage than the common species.

Hallowed Jhen Mohran is a relatively calm creature, but has been known to retaliate against Desert/Dragon Ships if attacked as they see them as potential rivals.

Much like the regular Jhen Mohran it inhabits the Great Desert and is fought in a similar manner, though the order of the attacks and movements the subspecies performs is completely different.

Retrieved from "https://monsterhunter.fandom.com/wiki/Hallowed_Jhen_Mohran?oldid=863392"
Community content is available under CC-BY-SA unless otherwise noted.