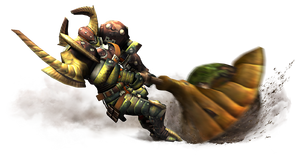 The Hammer (ハンマー Hanmā) weapon class is a fairly common weapon type able to be used by players since the first Monster Hunter game. Staunch and resilient, the hammer is perhaps the first representative weapon-of-choice to dictate pure, unadulterated damage directly to the target. In this field, the weapon's typical attributes allow a hunter to run openly with the weapon drawn, perform short-range, almost "bunting" and swing attacks with their initial attack buttons, and the ability to charge up different types of swings while moving. As the hammer class has immense damage potential, and indeed, some of the outright highest raw damage in the game, the weapon boasts no defensive or evasive capabilities aside from the standard rolling dodge maneuver. A sense of timing is needed to master the weapon's true damaging traits: releasing charged swings while timing and aiming diligently against the foe's movements. No easy task. Further, hammers have a decent variance of elemental attributes, and are useful for racking up elemental damage. It's not possible to cut tails with a hammer, but it is easy to break heads and other body parts. 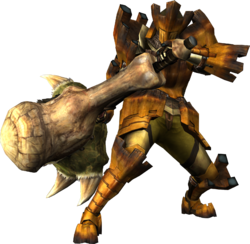 Typically of moderate sharpness, the hammer is able to supplant high damage through its shoulder-button charged moves. These include a single swift swing, a one-two "golf swing," and, depending on if the hunter is moving or not, a whirling attack or a heavy bash onto the ground.

Stun damage to a large monster can be visually noted when yellow streaks or "stars" are seen to appear at its head. The Monster will fall down and have stars circling its head when it receives enough stun damage and is "Knocked Out". This is the perfect time to launch a few combos while the monster is vulnerable. 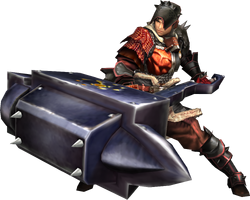 Hammers are sheer brute force. The best defense here is a good offense, and the best strategy for a hammer is to line oneself up safely while timing the R button swings at vital points. When hunting in groups, the hammer is useful for knocking and flinching monsters. Your other fellow hunters with cutting weapons however, are given a great opportunity to cut off the tails of monsters, or break parts without worrying about the monster attacking them. When you use the swinger at 4 swings, press triangle to perform the most effective hammer damage. Players call that powerful swing the "Golf Swing". This can KO a monster. As of MH3, landing attacks on any part other than the head will drain a monster's stamina, which will make the monster more exhausted than usual and may disable their more dangerous attacks.

It is very often to see newer players dismiss the hammer for being heavy, slow, and unwieldy to use despite its ridiculous amount of raw damage. One fact about the hammer is that due to its high damage, you will not be able to land many hits during a hunt compared to other weapons, however, you will still deal a lot of damage. Also, if you're used to dealing 3-4-5 hits and then retreating, you will find the hammer awkward. The following tips are written with accordance to MH3.