Harudomerugu has a skeletal structure similar to most Elder Dragons, they have black scales and numerous red and orange structures throughout, they also have four pairs of wings on their backs that more so resemble thick tendrils than wings. Most of these details are usually not seen due to the silver coating covering their bodies and forming proper wings, and several small spines on the neck and tail.

With special orange and red organs throughout its body Harudomerugu has the unique ability to produce and manipulate a liquid metal like substance as a defense mechanism. With its abilities it can create blob like projectiles that home in on a target, form large blades around their claws, create spikes to skewer hunters, throw a boomerang like construct, or surround itself in a sphere of the substance and fly around ramming into hunters amongst other things.

When Harudomerugu enters a state of rage, it is constantly surrounded by a puddle of this substance that causes harm to anything that steps in it, similarly to a Teostra's flame aura.

Additionally, Harudomerugu coats its body with metal that seems to be in a solid form, but is actually liquid being held onto its body through the use of its powers. Most notably, this metal attaches to its wings in a way that allows it to fly - when the metal dissipates, its wings are revealed to be thin and tentacle-like, incapable of lifting Harudomerugu into the air.

Harudomerugu is very aggressive and will use its metal-controlling abilities to attack anything that approaches it. It is known to be highly intelligent, even for Elder Dragon standards.

Harudomerugu are primarily found wandering the Snowy Mountains, but have also been known to attack the Interceptor's Base. 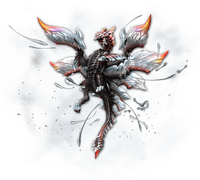