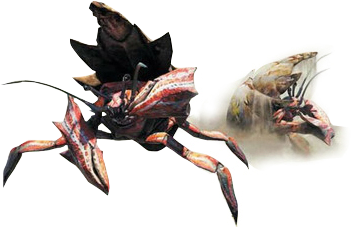 Hermaitaur are hermit crab-like monsters with red carapaces and a thick white shell. The shell is grown by the crab itself; only when they grow much larger, into a Daimyo Hermitaur, will they replace it with a Monoblos skull, or into a Black Diablos skull if they grow into the Plum Daimyo Hermitaur. Hermitaurs are related to the Ceanataur, a blue Carapaceon that lives in Volcanic regions.

When they are left undisturbed, Hermitaurs are most often seen picking through sand with their claws, presumably searching for food. Sometimes, a Hermitaur may wait under the ground for prey or a hunter to pass, jumping out from hiding and striking them when they walk overhead. A Hermitaur that is burrowed underground can be spotted by the puffs of dust that it regularly spits out.

They live mainly in Jungles and Deserts, usually near water, but can also be found in the cave systems of the Swamp.

Retrieved from "https://monsterhunter.fandom.com/wiki/Hermitaur?oldid=796805"
Community content is available under CC-BY-SA unless otherwise noted.