The Hunting Horn (狩猟笛 Shuryōbue) is a weapon first introduced in the second generation of the Monster Hunter series. It is similar to the Hammer in that it does impact damage and can stun a monster when it connects with the head. 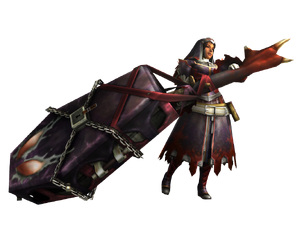 Initially, the Hunting Horns were far weaker than the Hammer, as per the damage formula. Even attacks which the two appear to share, such as the Superpound (Triangle+Circle), were weaker on the Hunting Horn. What makes the Horn different from the Hammer is the Recital ability which is triggered by pressing the "R" button.

As of Portable 3rd, the damage formulas have been changed and the Hunting Horn actually puts out more sustained damage than the hammer. The hammer still does more burst damage and more KO damage, but the HH's sustained is far superior. Also in 3rd the forward stab (done by pressing Select) can actually cut a tail; as seen in this video.

Each Horn has a different set of three color specific notes.These notes can be combined in various ways to create various effects, which mimic items such as Demondrug and Psychoserum, among others.

In MHP3 the notes are added to the "recital gauge" with each normal attack, in this way:

Whether the combination of notes is valid, the "recital gauge" indicate that is able to use the recital (

), else the character will execute the recital hit without activate any effects.

Note: In short, the idea is to combine different attacks depending on the situation

Note: perhaps needless to say but it is important to remember that when using any recital movement, the character will be playing for a while so it is advisable to use roll (

) to cancel the Recital quickly

Note: The Double Recital is useful for dodging and hitting a monster at the same time, besides boost the previous recital effect

The Monster Hunter Wikia does not take credit for these videos