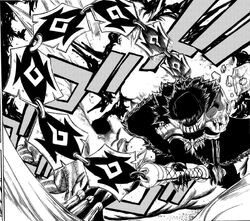 Featured in Monster Hunter Orage, the Hunting Whip is in the early prototyping stages of weapon development. Materials can include but are not limited to: Metal (chains or linked plates), Hide (Leathers from tanning hides and webbing), Bone (preferably from the monster's spine), and possibly wyvern tails.

The hunter would be able to move quickly with the weapon drawn due to the whip's light weight, but would not be able to use items or a shield, since controlling the whip's movement can require two hands. Attacks could be performed swiftly, but would be unable to inflict much direct damage, as whips are designed to incapacitate rather than kill. However, the loud crack of the whip might be able to scare away smaller monsters, while the pain induced by the wounds could have a paralyzing effect (especially if the whip was spiked or barbed).

This weapon has not been confirmed with CAPCOM and should not be considered a real weapon as of yet.

Retrieved from "https://monsterhunter.fandom.com/wiki/Hunting_Whip?oldid=414570"
Community content is available under CC-BY-SA unless otherwise noted.