Hypnocatrice is a medium-sized Bird Wyvern covered in bright, colorful feathers. It has extremely powerful legs with large feet, and a hard, sharp beak. Despite its feathered appearance, Hypnocatrice flies using pterosaur or bat-like membraned wings, leaving its feather arrangements strictly for display purposes. It possesses a sleep sac, which allows it to produce a colorless mist that can cause attackers to fall unconscious.

It is equipped with a sleeping sac that can put hunters and other monsters to sleep. Its strong legs allow it to deliver powerful kicks, and its small size and light weight allow it to move with speed and agility during battle.

Hypnocatrice is not particularly aggressive or territorial, but will stand its ground if threatened. 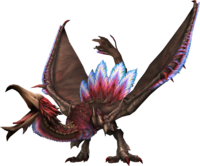 A Variant of Hypnocatrice introduced in Monster Hunter Frontier Season 1.0.

Retrieved from "https://monsterhunter.fandom.com/wiki/Hypnocatrice?oldid=867800"
Community content is available under CC-BY-SA unless otherwise noted.