Hyujikiki are covered mostly in a coat of golden-yellow fur, with numerous white streaks and tufts present on their limbs, wings, tails, torsos, and heads. Their heads are decently long with a pointed snout, a single short spike protruding from the lower jaw and slightly curved forward, slitted pupils on pale yellow eyes, a row of "skull teeth" of sorts, giving it a teeth bared expression even when its mouth, containing the actual teeth, is closed. Lastly atop the head near the back is a pair of large dark brown blade-like in appearance horns. Along the sides of their forelimbs is four small rows of small black spikes. The three toed pawed feet are covered in black ridged scales, and the forelimbs batch also feature three brown claws shaped in a very similar fashion to those on the forelimbs of Barioth, the hind legs also each have an extra dew claw toe. The wing fingers each have four brown spikes of varying size in both width and height growing on them. The wing membranes are covered in gray fur. Along the back are numerous dark brown needles of varying size and curved back shape, many also have lighter colored tips, and a good few are also partially covered by sets of large upturned dark brown scales. Along each side of the tail towards the end are four long brown spikes with slight curves at the end. The end of the tail is a sort of fur covered mace or club and features several lines of smaller spikes culminating into one especially large spike at the very tip.

In its second phase toxic bubbles, paralytic sparks, and sedative gases will radiate from its back.

Hyujikiki are very agile and put the numerous spikes around its body to good use, throwing them out in mass and trying to directly impale hunters, prey, and predator alike with them through direct physical attacks like tail swipes, tackles, and trying to back slam onto them from above. Similarly to Barioth Hyujikiki has access to breath attacks that create twisters, though the twisters Hyujikiki makes work as little differently. The twisters linger for a little bit after their creation and if any of Hyujikiki's needle clusters hits them then the twisters will send said clusters flying away in random directions. When pushed to desperation when near death Hyujikiki will make use of its venom producing organ to add toxic, sedative, and paralytic venom to its needles which will be inflicted randomly with the needles thrown, in addition Hyujikiki will also use the storm to its advantage to make even more twisters using its tail during this phase, and make more effective use of its needles like launching clumps into the air to rain down on oppon from above.

Like most large monsters within the Highland Hyujikiki are incredibly aggressive creatures and should never be underestimated, as they will utilize all of their natural abilities with ferocious and lethal intent on anything in their way beit prey, predator or hunter.

It lives in the Highland and Desert, but has also been sighted at the Fortress Ruins. 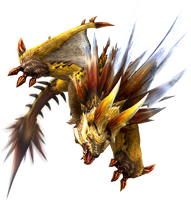