View source
watch 01:45
What is Insect Glaive?
Do you like this video?
Play Sound 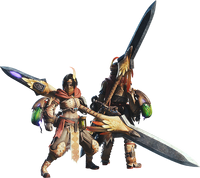 The Insect Glaive is a double-ended rod is capable of quick and fluid attacks. It also allows the hunter to pole vault at any time, allowing Jumping Attacks to be performed at will.

Coming with the rod is a giant insect called the Kinsect, which can be sent out to attack monsters, draining out an "essence" upon hitting and give it to the hunter upon returning. The hunter can either freely send out the Kinsect on a direct flight, or first shoot out a pheromone bullet at the monster that works as a "lock on" for the Kinsect to home in.

The Insect Glaive, while having multi-hitting attacks that work well with the Elemental playstyle, also have high-power attacks that also fit the raw damage playstyle.

Literally the other half of this weapon. Kinsects assist the users of Insect Glaive in various way, either by gathering Extracts to buff the user or assisting in dealing additional damage. Their utility increases as the series progresses.

They can be send out to attack, either directly from the direction the hunter is facing or through aiming mode not unlike that of Ranged Weapons, or through the use of "Pheromone Marking" from certain attacks that act as a spot for the Kinsect to home in.

When sent out and successfully attacking a monster, the Kinsect will drain an Extract from the monster, and upon returning to the hunter, provide them with buff based on the color of the Extract.

Like the weapon, Kinsects can be upgraded and evolved to strengthen them as the player progress through the game, increasing their damage output, flying speed, or stamina regeneration rate. There are also two type of Kinsects; Cutting and Impact.

Also known as "Essence", Extracts are a type of buff unique to Insect Glaive receives by sending out Kinsect to attack a monster and call it back.

There are four (three in MHRise) types of Essence that Kinsects can extract from a monsters:

Take note that the location of Extracts varies from monster to monster.

When all three types of Extracts, Red, White, and Orange, are present on the hunter at the same time, they combine into the even stronger "Triple Buff". Triple Buff provides a stronger boost to the Attack and Defense stats compare to the Single or Double Buff. However, once activated, its duration can not be reset. The Extracts must be re-gathered once the Triple Buff run out.

The Insect Glaive's attacking style is based on the art of Bōjutsu, where the wielder employs various long-ranged techniques like thrusting, sweeping, and spinning. The techniques are not limited to just attacking, however, as the rod can also be used to perform tricky maneuvers like pole vaulting to gain a high-ground advantage, or for evasive purposes.

Vaulting grants hunters access to Aerial Attacks at anytime they want. Repeated use of Aerial Attacks can lead to mounting the monster. If the mount is success, the monster is left vulnerable to attacks on the ground for several seconds.

Vaulting can also be used as evasive maneuver to get out of the way from incoming attacks, as well as repositioning or chasing after moved-faraway monsters. However, the vaulting initiation, as well as when the hunter is in the air, grants no invulnerable frame (I-frame) the way "true evasion" does.

Like enhancing the weapon itself, the Kinsects' statistics can be enhanced to allow them to evolve (in Monster Hunter terms). Their upgrading process requires Nectars, which enhance's the Kinsect's stats. Once enough nectar is fed, they can be leveled up, and eventually evolve into a different type of insect, such as the speed-type Garuuhel (ガルーヘルビートル Garūheru Beetle) and the power-type Zameel Beetle (ザミールビートル Zamīru Bītoru) in the Bone Glaive (ボーングレイブ Bōn Gureibu), shown in the images beside.

However, the enhancing process itself is extremely far more complex compared to other weapons, as the Kinsect needs to be upgraded multiple times before the Glaive itself can be upgraded.

Insect Glaive is the eleventh type of melee weapon in Monster Hunter. As the series progresses on, its upgrade system becomes more and more simple.

Other Insect Glaive Functions:
R = Make your Insect Glaive shoot out a pheromone bullet that lets your Kinsect home in where the shot lands. Very useful for draining the essence from hard to reach spots.
R (after any attacks) = Strike with the end-tip of the rod for an "Impact" type damage that also leave a pheromone mark where the hit lands.
R (hold) = Control the aiming reticule for the pheromone bullet shooting mode.
R + X = Send your insect out in a direct path.
R + X (hold and release after charge) = Charge up a bug release that does more damage than normal.
R + A = Call your insect back instantly.
R + B = Do a forward pole vault-jump
R + B (whilst holding backwards)  = Do a backward pole vault-jump
X (midair) = Do a downward slash that can stagger monster.
A (midair) = Shoot a pheromone bullet in midair. Since the firing's recoil pushes the players backward, this move can be use as an evasive maneuver when the players sense an attack coming from the monsters in front.

The Insect Staff creating waves like the Hunting Horn to call back the Kinsect.

The Kinsect being summoned.

3D render with a Kinsect 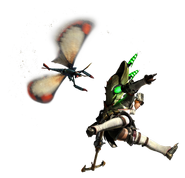 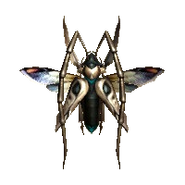 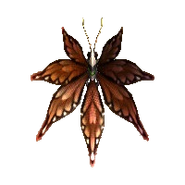 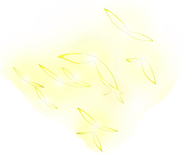 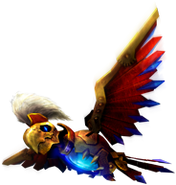