Iodrome is a Bird Wyvern introduced in Monster Hunter. 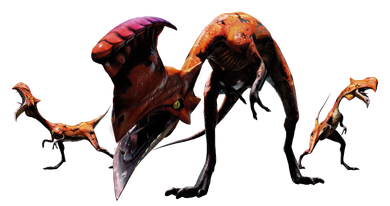 It is significantly larger than normal Ioprey and possesses a larger crest. Unlike other pack leaders, Iodrome has a more amphibian look, with salamander-like skin that seems to glisten with moisture, and a frog-like throat sac. It also lacks the sharp claws of its relatives, relying more on poison to bring down prey like Aptonoth and enemies.

Although not as strong as Flying Wyverns, it can quickly cripple hunters with the power of its pack and poison. Iodrome is a threat due to its speed, agility, considerable strength and poison. When threatened, Iodrome spits Poison from the poison sac in its throat.

Iodrome is the leader of a pack of Ioprey, and always travels with its pack for protection.

It is often seen in the various different Swamp and Volcano zones, although as of Monster Hunter 4 Iodrome can also be found in the Everwood.

For details on older games this monster has appeared in, see Iodrome Guides.

Retrieved from "https://monsterhunter.fandom.com/wiki/Iodrome?oldid=863464"
Community content is available under CC-BY-SA unless otherwise noted.