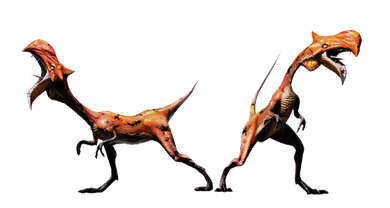 Ioprey have lithe, raptor-esque bodies. They have vivid red skin, with some black markings and purplish lavender colouration by the limbs.

Ioprey are easily distinguishable from other Raptor species due to their larger size and bulbous frog-like throat sac. This enlarged throat houses the Ioprey's potent poison sac, which gives it the ability to spit toxins at its foes. Whilst this might be a small nuisance to experienced hunters, the fact Ioprey hunt in packs can quickly make them a dangerous threat to a hunter not carrying a supply of Antidotes. The duration and toxicity of the poison varies between Ioprey found at different Ranks. The poison of those found in G-Rank will last much longer and be far more punishing than those of Low or High Rank.

Hunters familiar with Ioprey have observed that their permeable skin constantly need moisture. For this reason, Ioprey tend to dwell in danker regions - such as the Swamp, Great Forest and Jungle - where they can easily avoid dehydration. However, Ioprey are still found in places outside these comfortable habitats, such as in the Volcano, Volcanic Hollow and even the Fortress.

Retrieved from "https://monsterhunter.fandom.com/wiki/Ioprey?oldid=864136"
Community content is available under CC-BY-SA unless otherwise noted.