Ivory Lagiacrus is a Leviathan and a Subspecies of Lagiacrus introduced in Monster Hunter 3 Ultimate. 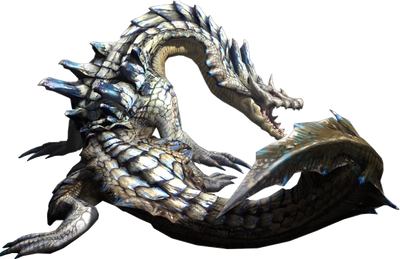 It sports a briny white body, unlike the usual blue of Lagiacrus. In addition, the various knobs, spines and horns on its body are a deep blue, compared to the common Lagiacrus's brown and orange.

It has many enhanced and powerful thunder attacks that can cover a wider area than those of the common Lagiacrus.

Unlike the other two species of Lagiacrus, Ivory Lagiacrus prefers a terrestrial lifestyle and spends very little of its time in the water.

Despite its almost exclusively terrestrial lifestyle, Ivory Lagiacrus tends to live in areas with large bodies of water, such as the Deserted Island and Flooded Forest.

Retrieved from "https://monsterhunter.fandom.com/wiki/Ivory_Lagiacrus?oldid=863429"
Community content is available under CC-BY-SA unless otherwise noted.