Jade Barroth is a Brute Wyvern and a Subspecies of Barroth introduced in Monster Hunter Portable 3rd. 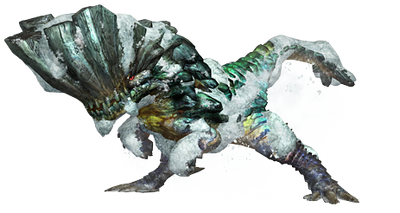 The Jade Barroth is capable of performing U-turn charges through the snow, head slams and shaking off its snow to inflict Snowman on the Hunter.

Jade Barroth are somewhat temperamental creatures that prefer a wide berth and can be docile if not provoked. But if angered, these creatures can be living nightmares, as they will relentlessly charge, bite, tail whip, and stomp their targets until they are dead.

Unlike their bog-dwelling relatives of the Sandy Plains, the Jade Barroth inhabit the frozen wasteland of the Tundra. Here, these large theropods live a tough life as food can be incredibly hard to come by along with having to deal with the large local predators that inhabit the environment.

This data was directly taken from the Monster Hunter Portable 3rd Demo Version.

Retrieved from "https://monsterhunter.fandom.com/wiki/Jade_Barroth?oldid=800686"
Community content is available under CC-BY-SA unless otherwise noted.