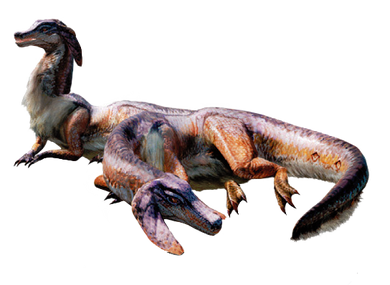 Jaggia are the females of the Jaggi species. They are noticeably larger and bulkier than the immature males, and are mostly a blue-purple in hue, the exceptions being orange areas along their limbs and the sides of their necks and cream-colored underbellies. Their tails, unlike males of the species, have no barbs, and instead have a soft feather-like hanging accent near their ends. Their frills, located behind their jaws, are also more subdued than in other Jaggi variations, and hang limply.

Jaggia and their kin display a higher functioning level of cooperation than other small Bird Wyverns, and are more of a challenge than the smaller Jaggi due to their greater resilience and larger area of attack. They do, however, still spend a nominal amount of time "barking" at threats, and still rarely prove much of a challenge lest a hunter find themselves surrounded. It is also notable that, unlike most other minions, Jaggia are sometimes found sleeping or lying down.

Retrieved from "https://monsterhunter.fandom.com/wiki/Jaggia?oldid=818497"
Community content is available under CC-BY-SA unless otherwise noted.