View source
watch 04:18
'Monster Hunter' - Meet the Jhen Mohran
Do you like this video?
Play Sound 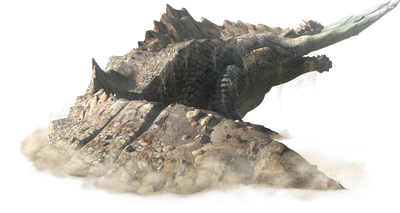 Jhen Mohran is an extremely large monster, with a long, almost serpentine body shape. On each side of its head are sturdy, sharp-ended tusks which can be broken by hunters. Due to its back legs being vestigial, it moves either by dragging its enormous body along with its arms on the ground or by swimming in the sand. A rocky spine runs along its back, where valuable minerals can be found.

Typically, Jhen Mohran is a calm creature, but will attack approaching Dragonships if threatened. In self defense, it rams the ship with its body and throws large stones off its back. It takes little notice of hunters climbing on its back, focusing more on the Dragonship.

It lives only in the Great Desert.