The Jumbo Chief (Japanese ジャンボ村の村長) is a village chief found within Jumbo Village. 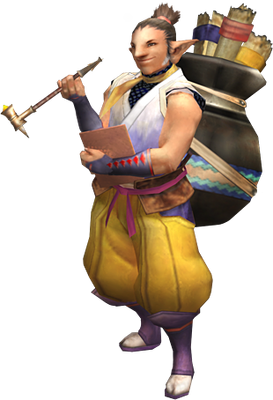 Jumbo Chief is a calm-minded adventurer.

While young, the Jumbo Chief was living in Cathar with his younger brother, the Smiling Youth. Both of them would always get some kind of trouble due to them being adventurous while they were still young. For example, the brothers would sometimes run into monsters while wandering around Heaven's Mount. Eventually, the Jumbo Chief left Cathar and traveled to Jumbo Village, where he became an important hunter for the village and one of its main protectors. At some point, while traveling, Jumbo Chief took in an orphan, Patty. While in Jumbo Village, he eventually became the chief of the village and helped it further develop with the help of an unnamed hunter. Once Jumbo Village became a well-developed village, he left the village in the care of Patty in order to create new settlements as he travels around the world. With his travels, he discovers legends about mysterious monsters, such as White Fatalis.

He wears dojo style clothing with a pot on his back, which holds a number of scrolls. Jumbo Chief is known to smoke from a pipe.

Retrieved from "https://monsterhunter.fandom.com/wiki/Jumbo_Chief?oldid=749011"
Community content is available under CC-BY-SA unless otherwise noted.