Kamu and Nono Orugaron are canine like Fanged Beasts with two sharp tusks and numerous quills running along their backs and tails, they also have fur tufts on their legs, backs and tails. What separates Kamu Orugaron are his longer tusks and quills, a larger fur tuff on its head, giving the impression of a "fur Mohawk", dark grey fur, and higher physical strength.

His attacks include a wind blast, jumping high and throwing spikes from his back, a double claw scratch attack followed by lunging head-but, a 180 degree bite, and a extremely loud roar or should be said more of a howl that deals a large amount of damage. If one was weak, then the other may defend it as it sleeps.

The Orugaron's wind blast are both straight and forward; the difference is that Kamu's blasts have a longer reach.

As of Monster Hunter Frontier G Genuine: In a G Rank quest against Kamu, it will have the ability to encase its legs with ice, creating a kind of armor. Once in this form, some of his attacks will become empowered by the Ice element to cause more damage to the hunters, Kamu will eventually break the ice off with a howl sending small shards flying away in a spread shot.

The Kamu Orugaron is male and often found accompanied by its female counterpart the Nono Orugaron. The pair form a bond much like the Teostra and Lunastra, or the Rathalos and Rathian. Interestingly however, unlike Rathalos and Rathian, Kamu and Nono will often stay with each other throughout the full course of the quest. It also seems they can attack almost simultaneously, with either the same move or moves that could cut the hunter off. The Kamu appears to be stronger than the Nono. Kamu can also be hunted on its own, this is the only time it separates from its partner.

Upon the killing of Kamu, Nono will appear and roar in despair at the loss of its mate. Kamu does the same upon the slaying of Nono.

Kamu and Nono Orugaron are nomadic and technically don't primarily live in the Swamp they are most commonly found in, they can also be found in places such as the Tower 3 and Fortress Ruins. 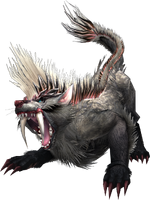 HC Kamu Orugaron has increased muscle mass and is no longer skinny in appearance. His eyes are bright blue and his nose, claws and paws are red like his spikes.

His overall speed is increased and will use more agile attacks more often. All his wind based attacks now have Dragon Wind strength and his roars now even louder than before requiring Super High Grade Earplugs to prevent stunning.

He gains new attack patterns that may confuse hunters used to normal Kamu. New attacks include a extra super head-but at the end of his double scratch head -but attack, light howling followed by forward flipping launching spikes then instantly repeating the same move turning left followed by a extremely loud howl, Triple wind breath attack where it blasts 3 areas ahead of himself and last kicking up dirt and mud behinds him causing multiple small hits that cause KO on hunters.

He will now get enraged with a red aura just for causing harm to Nono such as breaking parts or causing enough damage to make her flinch.

At SR100 upon killing Nono, Kamu will go into a super rage where attack power and speed is increased, It also will gain a new move were it can jump in one direction then return with a forward flip launching spikes then land leaving a wave of dragon strength wind.