Kayamba (Japanese カヤンバ) is a young Shakalaka that had ventured away from home. 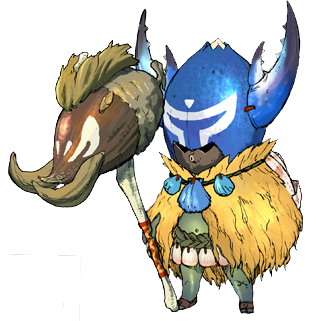 He describes himself as being "better than stupid Cha-Chalaka".

Both a childhood friend and rival for Cha-Cha, Kayamba has always had a love and hate relationship with him. He, along with Cha-Cha, were searching for a legendary mask to bring back to their tribe for a special ritual young Shakalaka participate in. As Kayamba began to claim the mask, Cha-Cha fought with him over the mask and mistakenly dropped it into an Aptonoth stampede. This lead to the mask being stuck in the crest of one of the Aptonoth, which caused both Cha-Cha and Kayamba to chase after the mask. Though they rode Jaggi and Aptonoth to try to get the mask back, a Rathalos captured the Aptonoth holding the mask and flew off with it, along with the two young Shakalaka riding on the creature. Kayamba fell off the Aptonoth immediately, after the Rathalos captured it, while Cha-Cha ended up falling into a Jaggi nest. This caused Kayamba to wander around many lands in search of the Rathalos with the mask, which lead to him running into a Duramboros in the Flooded Forest. Not too long after meeting the Duramboros, an unnamed hunter discovered him and saved him from the titan. This hunter brought him back to Moga Village, where he and Cha-Cha now call home. While in Moga Village, he helped his hunter defeat many monsters in battle, such as Ceadeus, Ivory Lagiacrus, and even Alatreon. When not in Moga Village, him and Cha-Cha are known to look for legendary masks in different lands.

Kayamba usually wears a blue helmet with white markings on the face area and two small, crab-like claws on top of the helmet. He uses a staff that bears a resemblance to the head of a Bulldrome. 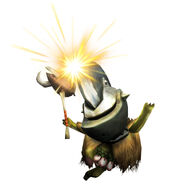 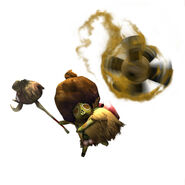 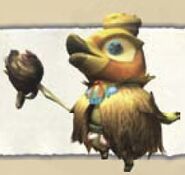 Ultimate Mask
Add a photo to this gallery

Retrieved from "https://monsterhunter.fandom.com/wiki/Kayamba?oldid=749012"
Community content is available under CC-BY-SA unless otherwise noted.