Keith (Japanese キース) is one of the many Legendary Rastas found within Mezeporta Square. He specializes in using the Long Sword. 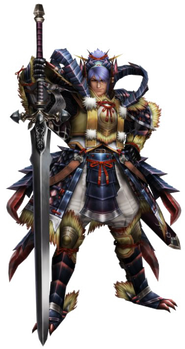 Keith can be best described as a Samurai. He is a respectable person with a serious personality yet a traditional outlook on the world. When sick, Keith loses most of his common sense and doesn't act like himself.

In his younger years, Keith would always train in a dojo to perfect his fighting skills as a hunter. Eventually, he became a legendary hunter as time passed on. Usually, he is one of the first hunters the Guild sends to perform an investigation on legendary monsters like Zerureusu and Shantien. Though he is a strong hunter, he has fallen ill to an unidentified disease in the past, but has fought it with the help of special medicine.

Retrieved from "https://monsterhunter.fandom.com/wiki/Keith?oldid=849207"
Community content is available under CC-BY-SA unless otherwise noted.