Fire diminishes or is extinguished 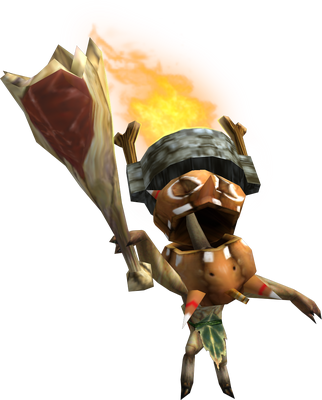 King Shakalaka is slightly larger than its subjects, but generally looks identical. It wears a BBQ spit upon its head, and weilds a thighbone as a club.

King Shakalaka is surprisingly strong for its size, able to cause a great deal of damage. It is able to launch fireballs from the BBQ spit atop its head.

The King Shakalaka is an aggressive leader. Its leadership skills come from its bond shared between it and its minions, but it relies on teamwork in order to bring down an opponent.

The King Shakalaka can be found in the Forest and Hills, and the Great Forest regions, where they rule small villages of Shakalaka, hidden deep in the woods.

Retrieved from "https://monsterhunter.fandom.com/wiki/King_Shakalaka?oldid=827481"
Community content is available under CC-BY-SA unless otherwise noted.