View source
watch 01:32
What is Kirin?
Do you like this video?
Play Sound

Kirin is an Elder Dragon introduced in Monster Hunter.

Kirin resembles a unicorn, though a closer look reveals that it has a lion-like face and is covered in scales, rather than a coat. Its majestic white mane and hair stand on end, as if charged with static. The monster often crackles with stray electricity.

Kirin can summon lightning to strike attackers or the area around it. When the Kirin is threatened or provoked, it can wreath itself in lightning, which is proven to harden its hide. Kirin has very few physical attacks and relies mostly on lightning strikes as its main force of attacking foes. With extreme agility, Kirin can literally run circles around its opponent, getting in close to gore an enemy with its horn, only to quickly dart away and prepare another assault. Kirin is very mobile and can jump and run incredible distances in short amounts of time.

Kirin appears to be relatively peaceful and passive, yet it is quite capable of launching a powerful barrage of lightning attacks on its foes. 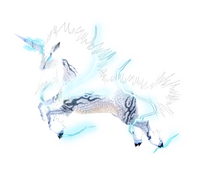 In Monster Hunter Frontier Season 10.0, HC Kirin is added. Now its eyes glow blue. It is surrounded by sparks of electricity at all times, is capable of performing a double back kick, a frontal flip that also releases a vast swathe of lightning, a charge so fast it almost seems to teleport and a huge array of new, powerful, and highly accurate lightning attacks.