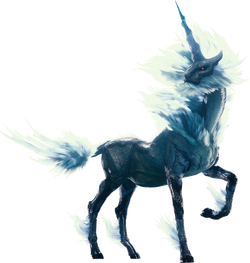 Kirin are Elder Dragons that appear in Monster Hunter: World. Kirin are so rarely sighted that little is known of their ecology. It's been said they envelop themselves in pure electricity when they are provoked. The lightning a Kirin cloaks itself with has been confirmed to toughen its skin. They can be found in the Coral Highlands. Their materials can be used to craft the Kirin Armor Set.

Kirin are a highly unpredictable species. Sometimes Kirin are calm, other times they are aggressive. In one legend, it was said that a Kirin actually destroyed a whole village with its electrical powers. Kirin attack using Thunder strikes it channels from its body. They can enter enraged states where they will call lightning from the sky. When enraged, it's body will deflect attacks while it's attacks become more widespread. During this state, only it's horn is vulnerable to attack.

Kirin have white fur used for picking up electricity. When enough electrical currents are picked up in the fur, Kirin will glow brightly and its hide will deflect most attacks. From this, the Hunter's Guild believe that Kirin's high metabolism helps it pick up electricity as well. A Kirin's most vital feature is its long horn. This horn is used to summon lightning from the sky, even when there isn't a storm cloud in sight, to strike any foes that threaten it. However, even if this horn is destroyed, Kirin can still summon lightning bolts with little effort.

Some of the more rare, older, or just stronger individuals are known for having unusually strong electrical powers that are yet to be fully understood. Some of these extra-rare Kirin are able to harness bolts of red thunder much like the equally rare White Fatalis when feeling threatened. Some of the larger, more stronger muscles are located in its legs, capable of delivering deadly kicks. Equipped with such powerful legs, all Kirin posses the ability to run at speeds so unexpectedly fast they appear to teleport, leaving behind a trail of blue electricity. The strongest ones can do this 3 times in a row in a red thunder rage before its horn loses its red charge again.

Kirin can be found in the following quests:

The following is a complete weapon list for Nergigante weapons:

Add a photo to this gallery
Retrieved from "https://monsterhunter.fandom.com/wiki/Kirin/Monster_Hunter_World?oldid=809588"
Community content is available under CC-BY-SA unless otherwise noted.