Kuarusepusu is a Leviathan introduced in Monster Hunter Frontier Forward.4.

Kuarusepusu have rough brown bodies with smooth grey underbellies, thick club like tails, and large spear like horns. They also have several large tusk like teeth on their lower jaws and most notably dozens of quartz like crystals on their backs, head and tails.

Kuarusepusu has the amazing ability to collect and focus sunlight and electricity using the crystals on its body as a weapon.

Many of its attacks are a combination and improvement of Agnaktor's and Lagiacrus with some very heavy attack power and range added. For example, when Kuarusepusu does a slither attack, it will not stop until it hits its target or passes it. The same goes for its digging attacks. When Kuarusepusu charges its thunder during a storm the following burst will be surprisingly wide in range compared to Lagiacrus on land catching many hunters off guard and paralyzing them. If Kuarusepusu charges during the sun shining bright it will make a flash much like Gypceros blinding hunters. At HR100, this flash is accompanied by four spinning solar beams that cause Fire damage hitting anyone who go blinded or failed to evade after the flash.

As for its beam attacks most are pre-eminent of Agnaktor's only instead of snapping its mouth its crystals start flashing and the beam comes off its horn. At HR5, Kuarusepusu adds sweeping beams to its tactics including a tail sweeping beam where it makes a beam with its tail instead of its head catching many hunters off guard.

A unique feature from Kuarusepusu is that it can leave crystals on the ground from tail attacks and shake them off. When the sun shines on them, stepping close will cause them to shine and then explode causing KO. But if you attack them you gain fire element on your weapon along with whatever element your weapon has at the same time for 1 powered hit. During a storm stand near them and they will glow blue then explode with electricity. But just like before attack them and gain their element which is Thunder. On a side note Kuarusepusu can activate all the crystals exploding them at once when it roars. When the crystals have been left alone long enough they will explode anyway by themselves.

In the Great Forest Peak, Kuarusepusu is super charged with electricity making all its attacks hit even more amazingly hard and its slither is extremely deadly homing in on hunters covered in electricity instantly killing hunters or using its even more improved thunder charge with fearful range.

In the Desert, Kuarusepusu can be found in pairs appearing to communicate by flashing their crystals as this is only seen during the quest with a pair. In a pair they perform a team based attack that requires a partner. They both signal each other by curling and flashing and when they both perform the same light show they begin to charge up and their crystals begin to flash red and they spread sparkles that glow in the air followed by a sun burst so huge anyone within the range of double the Kuarusepusu's body will be burnt with extreme Fire damage and out of range hunters get blinded causing KO.

It inhabits the Highland and to a lesser extent the Desert. It has also been spotted at the Great Forest Peak. 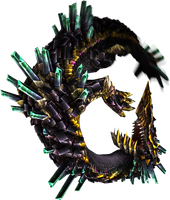 Hardcore Kuarusepusu have overall darker bodies with yellow spots and stripes on their sides and head, and yellow tusks.