View source
watch 01:18
What are Kushala Daora?
Do you like this video?
Play Sound

Steel Dragon
Shadow Upon the Tempest

Kushala Daora is a dragon with metallic skin. Its large wings connect at the base of its tail, making them seem even larger in proportion to its body. Two backward curving horns lie on either side of its head, blending in with the spikes that line its back. It has visible wind streaming around its body. Kushala has a slightly reddish nose, possibly a sign of rusting.

Kushala Daora has the ability to manipulate strong winds, creating a wind barrier that surrounds it during rage mode. The wind barrier can knock a hunter back, making the hunter vulnerable to Kushala Daora's attacks. The wind barrier also makes it difficult for the hunter to attack its body, except for the head and the tail. However, this wind barrier can be weakened by poisoning it. Kushala can also gather up huge bursts of wind and spit them at the hunter, blowing them back. It also has a charged wind blast that is capable of destroying foliage, stalactites, and other destroyable things on the ground.

For carves and materials from other games, see Kushala Daora Carves 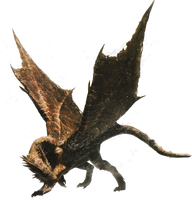 The Rusted Kushala Daora is an older Kushala Daora that hasn't shed its metallic scales recently. In response, its shiny, silver, metallic skin becomes a rusted brown. It can be fought in a download quest in Monster Hunter Freedom 2, and in the Gathering Hall (Quest Level 5, only able to start Quest if players has completed all HR2 and 3 Quests). Both of these Quests happen in the Town. Rusted Kushala Daora also appears in Monster Hunter 4 Ultimate where it attacks the city of Dundorma..

HC Kushala Daora is capable of inflicting the Defense Down status if the Hunter is close enough for the roar to launch him/her into the air. The ice crystals formed on the ground during a roar don't inflict the status but serve the purpose of stopping the red bar damage recovery of the Hunter.

Gou (剛) Kushala Daora has an exclusive attack where it charges up an attack and then flaps its wings violently for a few seconds, enveloping itself in a Hurricane-like twister. In rage mode this move has a charge-up time of approximately 1 second.