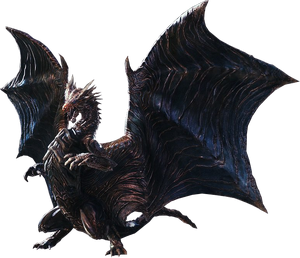 Kushala Daora are Elder Dragons that appear in Monster Hunter: World. This monster shields itself with fierce winds, preventing anyone from approaching it. Its skin consists of hard, metallic scales. They can be found in the Ancient Forest and Elder's Recess. Their materials can be used to craft the Kushala Armor Set.

Kushala Daora is a target in the following quests:

The following is a complete weapon list for Kushala weapons:

Add a photo to this gallery
Retrieved from "https://monsterhunter.fandom.com/wiki/Kushala_Daora/Monster_Hunter_World?oldid=778182"
Community content is available under CC-BY-SA unless otherwise noted.