A large, wombat-like Fanged Beast. Its ears are long and highly sensitive, and its face features a beak-like mouth along with small red eyes. A Lagombi's belly is made of a low-friction material and is shaped so that it can slide upon the ice like a sled. It is covered in a thick fur coat to keep it warm in its sub-zero homeland.

A Lagombi has superb hearing in order to remain aware of predators. Fortunately for hunters, that also leaves it vulnerable to loud noises, such as Sonic Bombs (like Yian Kut-Ku). It attacks by throwing chunks of ice, swiping with its claws, and sliding around on its belly in order to ram foes. To traverse from area to area it slides on its belly much like a penguin. In Monster Hunter 4, Lagombi is given 2 new attacks, including a jump attack followed by a roll, and the ability to throw a chunk of ice straight up to hit climbing hunters.

Lagombi is a relatively docile monster, but will respond with aggression when provoked or threatened. It is evidently an insectivore, as it enjoys feeding on Bnahabra.

Lagombi has uniquely evolved to thrive in the icy environments of the Tundra and Frozen Seaway.

The name Lagombi is derived from the Greek word for hare, "lagos". The "-mbi" was added by the localization team as a way to give the name a cuter sound. 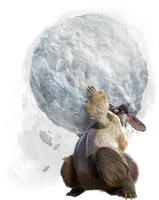 A Deviant of Lagombi first appearing in Monster Hunter Generations.

A Variant of Lagombi that appears in Monster Hunter Explore.

Retrieved from "https://monsterhunter.fandom.com/wiki/Lagombi?oldid=847577"
Community content is available under CC-BY-SA unless otherwise noted.