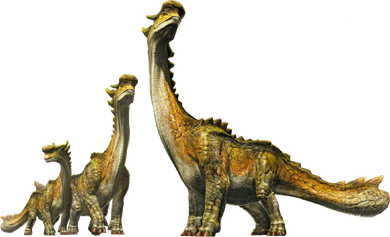 Larinoth are distinctively big monsters, compared to other herbivores and even many large monsters. It possesses a great height, which is mostly attributed to its extremely lengthy neck. The tail of a Larinoth is rounded and club-like, with spiked plating that runs along the back and up to the crest on its head. Said plating is nearly entirely green, and the Larinoth's underbelly is a cream color.

Larinoths appear to be based off of sauropods, though they do not seem to be based on any one genus, but they have body structures that reminiscent to Brachiosaurus.

Retrieved from "https://monsterhunter.fandom.com/wiki/Larinoth?oldid=843208"
Community content is available under CC-BY-SA unless otherwise noted.