Lavanda (Japanese ラヴァンダ) is the Guild Master of the Hunter's Pub and owner of the Soaratorium. 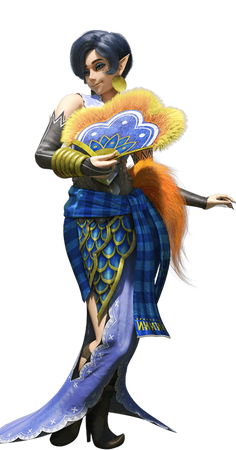 Lavanda is considered to be mysterious in many aspects. The only person who seems to really know much about her is Wehner.

Once a legendary hunter, Lavanda was once a go to hunter for both the Wycademy and Hunter's Guild for a long time. After sometime of being a hunter, she retired for unknown reasons. It is said that the last monster she hunted was a Diablos, which eventually became a Bloodbath Diablos. At some point after retirement, she purchased the Soaratorium and renovated the inside of it for the Hunter's Pub, a place where hunters can gather and go on hunts together. Though she isn't a hunter anymore, Lavanda does disappear from her post occasionally to deal with secret manners.

Lavanda wears a beautiful dress made of Malfestio materials.

Retrieved from "https://monsterhunter.fandom.com/wiki/Lavanda?oldid=777467"
Community content is available under CC-BY-SA unless otherwise noted.