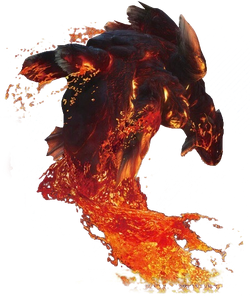 Lavasioth are Piscine Wyverns that appear in Monster Hunter: World. These monsters utilize molten lava as armor. They are extremely aggressive and will attack without prejudice until the threat has been eliminated. They can be found in the Elder's Recess. Their materials can be used to craft the Lavasioth Armor Set.

Lavasioth has been overhauled, with new moves, new behavior, new animations, and a new armor mechanic in Monster Hunter: World. Lavasioth's lava shell will cool as it stays out of magma, similarly to Agnaktor. When the lava cools, attacks will bounce off and elements become less effective. The lava shell can be forcefully softened by using a Torch Pod or a fire element attack.

The weakspots of the Lavasioth include the head and underbelly.

The Lavasioth is the target of the following quests:

() when covered in hardened lava.

The following is a complete weapon list for Lavasioth weapons:

Add a photo to this gallery
Retrieved from "https://monsterhunter.fandom.com/wiki/Lavasioth/Monster_Hunter_World?oldid=781431"
Community content is available under CC-BY-SA unless otherwise noted.