Lea (Japanese リア) is one of the many Legendary Rastas found within Mezeporta Square. She specializes in using the Great Sword. 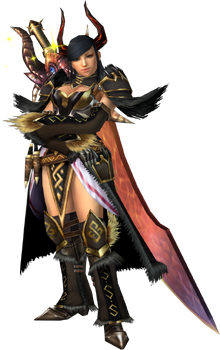 Lea is a very polite woman when not hunting, but she turns extremely violent while hunting. She is known for constantly swearing in the middle of a hunt out of anger and thrill.

Nothing is really known about Lea's past, however, she is considered to be one of the strongest Legendary Rasta around. Other hunters in this group show great respect to her, though know how she changes suddenly in an instant during hunts. Despite her aggressive tone as she hunts, she can be quite peaceful most of the time. In fact, Lea's favorite hobby is gardening.

She wears Milad F, along with Durr F on her head, and uses a variety of different Great Swords.

Retrieved from "https://monsterhunter.fandom.com/wiki/Lea?oldid=749024"
Community content is available under CC-BY-SA unless otherwise noted.