View source
watch 02:23
Wiki Targeted (Games)
Do you like this video?
Play Sound

Leila (Japanese レイラ) is one of the many Legendary Rastas found within Mezeporta Square. She specializes in using the Tonfa. 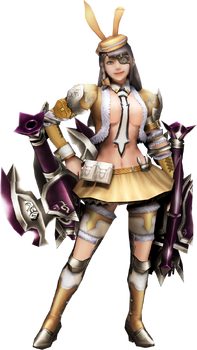 Leila is a serious individual that talks in a low tone. When angered greatly, she is known to sometimes go on a rampage and not willing to listen to anyone, even the Hunter's Guild.

At a very young age, she lived in a village within the Bamboo Forest with her sister, the Diva. In this place, her people had lived in peace with the bamboo-controlling Elder Dragon, Inagami, for thousands of years. Due to her village taking advantage of the Inagami's strange power in attempt to grow their crops during a bad harvest season, Inagami destroyed their whole village out of outrage. This destruction led to her family becoming travelers across many lands. Sometime much later, Leila mastered using the Tonfa and had gotten herself a boyfriend. Within this time, she had amnesia from an unknown cause and had forgotten some things about her past like her sister. However, her love was killed by a Meraginasu, which put her in an untiring rampage until calmed down by her sister and friends, along with an unnamed hunter. She has killed some rare species in her time hunting, like Garuba Daora, in such rampages. Though she remembers that the Diva is her sister, Leila can be at odds with her at times.

Leila wears Gold Carol armor and she uses a variety of Tonfas.