Lolo Gougarf is part of a dimorphic pair of Fanged Beasts first introduced in Monster Hunter Frontier G2. They are known to inhabit the Gorge and can be encountered as early as HR100. 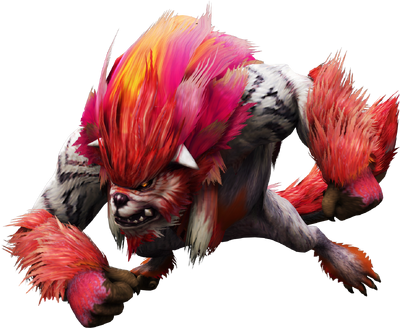 The Gougarfs are large, ape-like creatures with canine features that inhabit the Gorge. They are genetically dimorphic and can be found in one of two distinct forms. These forms are so different in fact that separate names were conceived to identify them. Lolo Gougarf is the red-furred monster, with a flatter, bulldog-like face and white-and-grey stripes. Ray Gougarf is the blue monster, with a longer, wolf-like snout and navy blue-and-white stripes. Ray possesses the dominant gene, making it the more common of the two forms. Lolo possesses the recessive gene, which causes it to look different and behave much more aggressively.

These monsters are physically strong, capable of lifting and throwing their own body weight. Like Rukodiora, this pair of monsters is capable of manipulating Magnetism to ensnare or repel foes at will.

These monsters are most often seen alongside one another. The two of them are capable of attacking in unison to overwhelm prey and foes alike. Ray is known to be rather docile, avoiding conflict when possible. Lolo is the opposite, highly aggressive and willing to engage foes. Because of this, they will exhibit different behaviors in battle. If its Lolo partner is killed, Ray will flee the area and be unable to enter an enraged state. On the other hand, if Ray is killed, Lolo will become constantly enraged and will remain to fight the attackers to the death.

Retrieved from "https://monsterhunter.fandom.com/wiki/Lolo_Gougarf?oldid=674651"
Community content is available under CC-BY-SA unless otherwise noted.