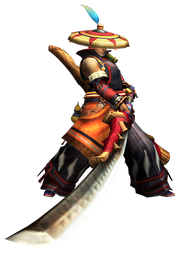 The Long Sword (太刀 Tachi) (weapon class) is a class of weapons available in the Monster Hunter series of games. Originally, Long Swords (Also called tachi blades) were Great Swords that resembled katanas. They became an independent weapon class in Monster Hunter Freedom 2. Since then, they have become a very popular choice amongst the player base, having comparatively swift attacks, fluid controls, and relatively high damage potential with the addition of the Spirit combo.

Having moderately high attack power combined with mobility means having some drawbacks, however. Since its departure from the Great Sword family, the Long Sword has no ability to guard against attacks by any means, aside from the standard dodge rolls. Thus, the hunter must be aggressive enough to know when and where to attack, while being cautious enough to know when to cease attacks and dodge. The Long Sword has a short delay after most attacks, but balances this with a back-hop/wide swing attack (known officially as the "Fade Slash") which can be performed after any attack, allowing fluidity. The hunter must take some risks, in order to fill up his Spirit Gauge, which, once full, increases damage dealt and enables the sword to unleash a powerful Spirit Combo: a fast combo with 5 attacks that can be extended for up to 7 hits, and can be canceled out or finished at any time with a Fade Slash.

Long Swords are very versatile weapons. Their handling is quite different from the Great Sword's, even though they come from the same branch. Hunters will find that one can often upgrade a Great Sword into a Longsword, but almost never vice-versa.

The Long Swords most defining trait is the Spirit Gauge. Using it correctly is vital to mastering the weapon. To perform a Spirit Attack, press the R button.

In PS2's Monster Hunters Weapon Attack with the Right Pad

R = Spirit Slash attack (Can be Used up to 3 times)

NOTE: The Spirit attack can be used 3 times by itself, and the third attack will always be the finishing slash, using 3 slash attacks instead of 1. Also, only the first and second attacks can be chained to an extra attack with the circle button, while the third attack can only be followed by a roll (like all the other attacks) or a Horizontal slash and a small jump back (also just like all the other attacks).