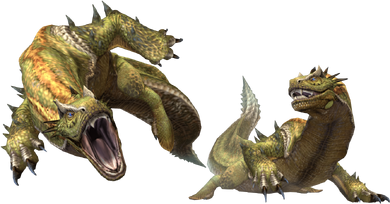 Ludroth are mostly yellow-green in coloration, with long, sinewy bodies that enable swift and sweeping underwater movements to confuse their prey. Their claws are stubby, but effective, and their strong tails end in reinforced bony segments. Powerful jaws allow for moderately strong biting attacks.

The majority of Ludroth are female, and form harems around the male Royal Ludroth, which has a notable sponge coating. Female Ludroths also have a sponge like material growing on them, which is the yellow-brown stripes along the top of their spines (behind the head). It is unclear whether the sponges are part of a co-evolved symbiotic relationship or the result of some unknown trait.

Ludroth are capable of producing globules of mucus that they can spit at enemies. The mucus inflicts Waterblight on Hunters, which slows the speed of stamina recovery.

Ludroth are amphibious, and should not be underestimated on land. However, Ludroth are far harder to hit underwater as they have far more range and a wider variety of attacks, not to mention the player's decreased ability to quickly attack underwater. They are capable of using their almost serpentine forms to slither and pounce on Hunters. They emit a barking noise when threatened, and although dangerous on land, are doubly so when confronted underwater. Notably more powerful, swifter, and with attacks that may disorient a hunter caught unaware, a Ludroth in her natural habitat can be a challenge; small crowds of Ludroth are also more often found underwater, and can quickly part even an experienced hunter from a good volume of their health.

Ludroth are found in the Flooded Forest and Deserted Island because there is an abundance of food and an agreeable mixture of coastline and aquatic environment for them to use as territory.


Retrieved from "https://monsterhunter.fandom.com/wiki/Ludroth?oldid=812511"
Community content is available under CC-BY-SA unless otherwise noted.