Lunastra is a dragon with leonine features and a cool coloration. She has a prominent mane, large fangs, and a distinct crest that resembles a sort of crown. Her wings are covered in fur. She is the female counterpart to Teostra.

Lunastra, and her partner Teostra are unique monsters because they actually use their Flame Sac to produce a fire breathing effect, rather than just a beam or a fireball. Prior to Monster Hunter: World, Lunastra could produce a highly flammable powder and, by using her wings, spread it across the air. After this, she gnashes her teeth to create a spark, which then causes the powder around herself to ignite and explode. The explosions have random range; they can be either close, reasonably far away or very far away from where she's standing. If the sparks are red, then the explosions will be close, but if the sparks are yellow, then the explosions will be distant.

However, in Monster Hunter: World, Lunastra can no longer spread powder across the air to create explosions. Instead, she spreads blue powder across the ground which ignites when it comes in contact with fire, creating a blue flame that slowly damages whoever stands in it, and slowly drains the health of anyone near them who doesn't have protection against the heat, even in areas that don't normally require such protection, such as cool drinks. She often uses her wings to spread this powder, which creates a strong wind that immobilizes hunters for a moment. When a fire attack comes in contact with the blue flames, it will deal damage and create more strong wind. The blue flames can be extinguished with any water weapon. Lunastra can also create a massive heat wave that will quickly drain the health of anyone in it's range, it creates blue fire nearly everywhere within it's range, and it creates wind pressure to make it difficult for any hunter caught within it to escape.

Lunastra is the female counterpart to the Teostra, though the two are rarely seen alongside one another. But, when they are seen together in Monster Hunter: World, they can do a special bond attack. No other monster has this, and it's a combination of Lunastra's heat wave together with Teostra's supernova.

Like Teostra, prior to Monster Hunter: World her flame-producing abilities can be diminished if she is poisoned or her crown-like horn structure is destroyed.

Like their male counterparts they are quite aggressive, although under typical circumstances Lunastra are known to be less quick to attack, this changes during their mating season however with them immediately attacking on sight.

They are known to inhabit hot areas such as volcanoes and deserts, and are specially adapted to utilize the Fire Element. 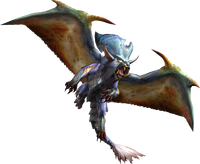 Hardcore Lunastra is a HC Monster introduced in Monster Hunter Frontier G6. Her wings are much redder than her standard counterpart, her horns are longer and thinner, and her teeth and wingtalons are yellow.

Hardcore Lunastra is much faster than a regular Lunastra, and she now has a multi-charge attack similar to that of Duremudira.