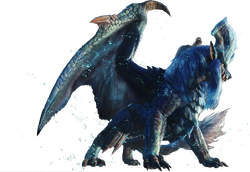 Lunastra is an Elder Dragon that appears in Monster Hunter: World. This rare monster litters the air with hot blue dust. There are reports of it traveling with her mate, Teostra. The monster can be found in the Wildspire Waste and the Elder's Recess. Their materials can be used to craft the Lunastra Armor Set. Lunastra was permanently added to the game on May 31, 2018.

Lunastra, and their male version Teostra, are unique monsters because they actually use their Flame Sac to produce a fire-breathing effect, rather than just a beam or a fireball. The Lunastra can produce a highly flammable powder and, by using her wings, spread it across the air. After this, she gnashes her teeth to create a spark, which then causes the powder around herself to ignite and explode. The explosions have random range; they can be either close, reasonably far away or very far away from where she's standing. If the sparks are red, then the explosions will be close, but if the sparks are yellow, then the explosions will be distant.

Lunastra's 'supernova' is performed twice in succession, after which all the fire patches in the area simultaneously disappear. Although more telegraphed than Teostra's, a wide area around Lunastra will be shrouded in health-sapping heat that can't be neutralized with Cool Drink. The heat will go off after the second blast.

Lunastra is the female counterpart to the Teostra. When Lunastra and Teostra are in the same area and are enraged they will perform a unique animation known as a 'Bond'. During this 'Bond', Lunastra and Teostra will simultaneously perform their 'supernovas' creating a massive explosion dealing significant damage to any player caught within it.

Unlike other Elder Dragon quests, if an Elder Dragon invades in Lunastra's quest, they will stay in the locale, even after a Turf War.

Lunastra is the target of the following hunts:

The following is a complete weapon list for Lunastra weapons:

Arch Tempered
Add a photo to this gallery
Retrieved from "https://monsterhunter.fandom.com/wiki/Lunastra/Monster_Hunter_World?oldid=779765"
Community content is available under CC-BY-SA unless otherwise noted.