Lute (Japanese リュート) is a novice monster rider seen living in Hakum Village. He is also the default male character the player plays as in Monster Hunter Stories. 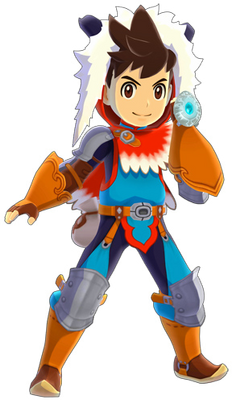 In the anime, Lute is an adventurous boy who cherishes any sort of friendship over strength, and will tirelessly protect his friends, or go out of his way to form friendships.

Lute is a novice monster rider who aspires to be Rider and is interested in exploring the wide open spaces of the world. He wants to explore the world in order to better understand the relationship between monsters and riders. He planned to leave the village with his companion, Navirou, in order for them to venture out together. Now these two are looking for answers about an unexplained phenomenon in the form of a black mist with the help of various individuals they encounter.

Lute is a Rider with brown spiky hair and brown eyes. He wears a special Rider outfit that consists of a orange and blue hooded cloak that resembles the Rathalos in appearance over a navy blue shirt and pants, metal knee and arm pads, brown bracers and boots, and a small bag on the left side of belt.

In the anime, after returning from the Illusion Tower, Lute received a Rathalos Blademaster Set & Great Sword, which use to belong to his father at his age.

Ratha the Rathalos (Main), His very first Monstie and closest friend in the game. In the anime, through the Rites of Channeling, Ratha gains the power of a Kirin guarding a Kinship Ore. Ratha is also able to perform a completely new Kinship Attack, Sky High Extreme, a more powerful version of Sky High Dive.

In the anime, his other Monsties include:

Velocidrome, Lute's second Monstie that he obtain after being separated from Ratha. It is shown to be a bit forgetful.

Blue Yian-Kut Ku, A Monstie Lute obtains after stealing the egg from a Blue Yian-Kut Ku Nest. Lute points how it's similar to Ratha. Like the rest of its species, it fears the Yian Garuga.

Basarios, The fourth Monstie Lute obtain to help Navirou from a pack of Gendrome and Genprey. Before reuniting with Ratha, it was Lute's main Monstie he used in battle.

Tigrex, Lute's final Monstie that was acquired before or during his visit to Koapni Village. It was used against a Yian Garuga to save Pansy.

He also obtained a Gendrome Egg and hatched a Khezu, but was never seen riding them.

Retrieved from "https://monsterhunter.fandom.com/wiki/Lute?oldid=815020"
Community content is available under CC-BY-SA unless otherwise noted.