This page is still under construction. Please be patient. 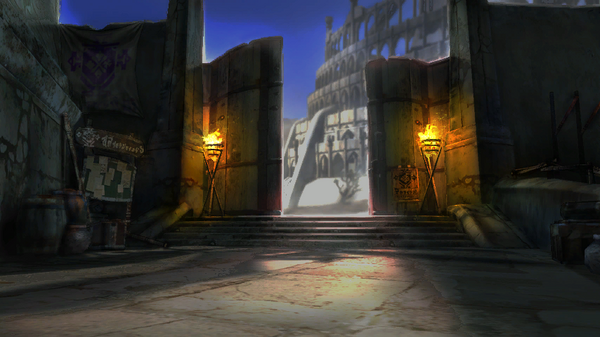 Arena Challenges are quests that can be either 1-player or 2-player splitscreen co-op. Initially, there are only 3 monsters available to fight: Great Jaggi, Qurupeco, and Barroth. As the hunter progresses in the single player offline mode (Village), more monsters are unlocked (Rathian, Uragaan, Lagiacrus etc.) through the completion of capture quests. The final 3 challenges "Arena free-for-all" "Water arena rumble" "Wyvern team takedown" are unlocked by getting and beating all of the challenges before them. It doesn't require killing them within the goal time. The rewards of arena quests, including armour tokens and vouchers for a free meal with more potent results, can be transferred to the player by talking to Chamberlyne (The felyne found in your house).

In the Land Arena there is a pile of boxes near the middle of the arena which you can gather 2 Lifepowder from. There are also ruined towers along the walls from which the player can gather as well; one has 2 Flash Bombs and the other two have 2 Mega Potions each (These items can be carried over into story mode via. Chamberlyne).

﻿ To unlock you must kill and capture Royal Ludroth

To unlock you must kill and capture the Rathian.

To Unlock you have to kill and capture the Lagiacrus.

To unlock you have to kill and capture the Uragaan

The following challenges are unlocked after all previous challenges have been completed.

Retrieved from "https://monsterhunter.fandom.com/wiki/MH3:_Arena_Challenges?oldid=402805"
Community content is available under CC-BY-SA unless otherwise noted.