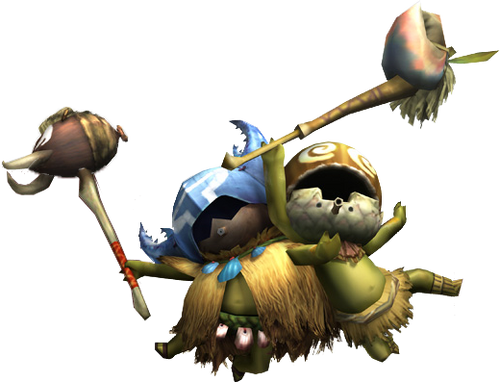 Throughout the game you will meet two characters who will assist you in the hunt. The first one will be Cha-Cha, who first appeared in Monster Hunter 3, returning to support you in your adventure. But this time, you will be joined by another aide: Kayamba. Initially, they compete with one another, but as time goes on, they will become more and more friends. Both Shakalakas can join the hunter in the single-player mode to aid the hunter with their dances and abilities. One of them can be brought into multiplayer mode as well, but will only appear if there are only 2 hunters in the quest.

The food skill Felyne Trainer increases the amount of XP Cha-Cha and Kayamba get from a quest and food. If this skill is obtained, it is best to bring as many steaks, pink livers, and Ethnic Wyvernmeats as possible to help level them up quickly. However, after the first food item given each subsquent item given has reduced experience gain, though they will still give the other boosts (stamina, rage, health gain), and there is a limit to how many can be given during the course of an outing before the Shakalakas complain of being full. Lifecrystals and Lifepowder can be used to restore health to the Shakalakas. In the same way, horns can be used to boost their attack or defense and heal them when used.

(NEEDS VERIFICATION) As Cha-Cha and Kayamba go on hunts, their degree of mastery with a mask will increase.

The first Well-Done Steak given to a Shakalakan in a hunt yields 7 mastery exp, while the second given in the same hunt yields 3 mastery exp. In addition, the amount of mastery experience a Shakalan gets from a hunt is dependent solely on the length of the hunt.

Cha-Cha and Kayamba can gather items from the environment with a frequency depending on their mask. They also sometimes carve with a similar likelihood as gathering. If the Shakalakans carve/gather a supply item (i.e. a Ration in an Epic Hunt), that item slot will be empty when reclaiming items. While Cha-Cha and Kayamba can gather items, if they start gathering from a gathering spot, and the gathering spot disappears mid-gather, they will claim to have found an item, but will not obtain an item.

After clearing the 5★ urgent, you will notice that Cha-Cha is no where to be found. This is normal and part of the storyline. Upon completion of the first 2 quests listed under 5★, Cha-Cha will return.

Kayamba is able to share all of the masks with Cha-Cha except their main masks, the Acorn Mask and the Pincer Mask which can only be worn by Cha-Cha and Kayamba, respectively. Cha-cha and kayamba can't wear the same mask at the same time, except for the Cosmic Mask.

Various types of meat can be given to your Shakalaka Warrior that will raise his health, stamina, or even cause it to become angry. To feed your Shakalaka Warrior, simply find the item in your pouch, select it and choose the 'give' option. In addition, depending on the mask's mastery, giving a certain amount of meat, you can increase the mastery of his mask. But remember the highest amount of meat that a Shakalaka can eat in each mission is 3, beyond this number, the increase of experience of his mask will not be calculated.

At all times, Cha-Cha and Kayamba are equipped with two separate Dances. When combined, these Dances allow the two Shakalaka to Dance and bestow special effects onto you, usually in the form of Health recovery! There are five Dances in total. Cha-Cha knows two and learns an additional Dance after Kayamba becomes your ally. The other two Dances can be traded from the Argosy Captain after specific Quests have been completed.

To change a Shakalaka's Dance, talk to them and choose the Select Dance menu. Pick two of the available Dances to create a table of possible effects. Each dance has a note attached to it, and each combination of notes creates a different table of effects. Each Dance has a Stamina cost attached to it, displayed in terms of High, Medium and Low. The higher the Stamina cost, the less often they can Dance. Keep this in mind when selecting Dances.

Unconfirmed: A hunter may have a tiny duration of invincibility when healed by Cha-Cha or Kayamba. 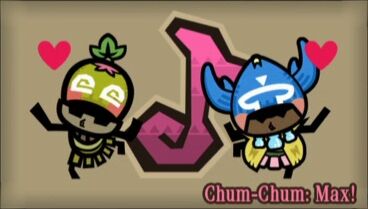 Cha-Cha and Kayamba have a fondness counter representing the friendliness between them. This affects their likelihood of dancing at the same time during quests. The maximum Chum-Chum level is 5. Each level increase rewards you with a Chum-Chum ticket from the Canny Felyne in the Port. The tickets can be used to make a set of Dual Blades.

Retrieved from "https://monsterhunter.fandom.com/wiki/MH3U:_Shakalaka_Warriors_Guide?oldid=761874"
Community content is available under CC-BY-SA unless otherwise noted.