Some areas also appear to be smaller or larger compared to the others, but it may be due to the fact that the maps were a little compressed to fit the PSP screen. The short-cut from the Sandy Plains Base Camp remains, but the short-cut from the Flooded Forest Base Camp is removed due to its underwater nature.
The Deserted Island Base Camp has been changed completely, and now has no short-cuts.
*Unlike MH3, the gathering points will be at fixed points rather than random spawns. 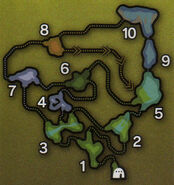 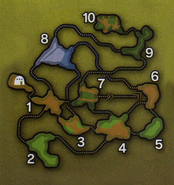 New Flooded Forest Map
Add a photo to this gallery

Retrieved from "https://monsterhunter.fandom.com/wiki/MHP3rd:_Areas?oldid=722079"
Community content is available under CC-BY-SA unless otherwise noted.