Magatuki is a man with blue eyes and long black hair. He wears tandard Stygian Zinogre Blademaster armor, but the helmet is simplified, with only the horn ornament and half mask. His Kinship Stone is on his chest ornament.

[Water Bewitching Sword] is a weapon change form of Magatuki, he wields a Mizutsune Great Sword. His element is now

[Out of Control] is a form of Magatuki.


Appearance
As [Out of Control], Magatuki is basically the same as usual. The only difference is that he wears a full mask instead of half face. In addition, His Kinship Stone on chest turns purple instead of blue.

[Lord of Demonkin] is an alternate form of Magatuki, created in a collaboration with a mobile game Dragon Quest of the Stars. His outfit imitates Psaro from Dragon Quest IV.


He wields Psaro's sword also from Dragon Quest IV. In the game, the sword are considered as Great Sword.

[Sinister Armor] is an alternate form of Magatuki, created in a collaboration with Monster Hunter Rise.


Appearance
As [Sinister Armor], Magatuki wears tandard Magnamalo armor, but also a half mask without helmet.

He wields a Magnamalo Great Sword. 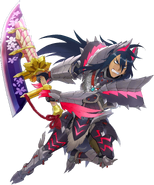 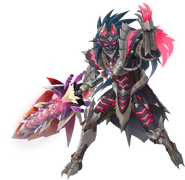 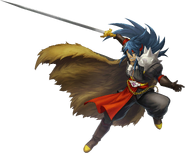 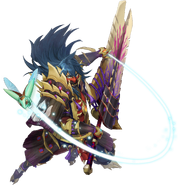 Out of Control Magatuki Icon 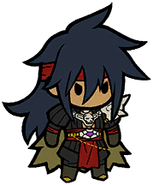 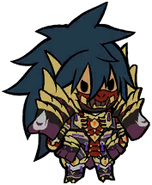