Malfestio is a Bird Wyvern introduced in Monster Hunter Generations.

Malfestio superficially resembles an owl. Its body is covered in blue plumage with a grayish belly, a yellow collar, and a white face with a small beak and red eyes. On its head are long tufts that point back and are tipped with yellow. There are hints of yellow on its legs that end in scaly feet that have two talons and one small vestigial toe. Its wings have bright blue membranes. Along its wings are long blade-like claws. Its flattened tail ends in a three-pointed shape. Like a real owl, it can turn its head around to see directly behind itself.

From its feathers Malfestio can produce yellow scales that disoriente prey and put them in a confused state. It can produce an ultrasound beam that can easily put prey to sleep. The claws along its wings are usually hidden but are revealed once the Bird Wyvern becomes enraged. In rage mode it will begin to use these claws as weapons.

Malfestio is a nocturnal predator that uses its talons and wing claws to attack prey. Like Nargacuga, it sleeps in trees to avoid terrestrial predators.

Malfestio is known to inhabit the Jurassic Frontier, Deserted Island, and Primal Forest. 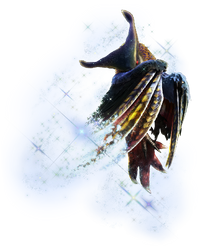 A Deviant of Malfestio introduced in Monster Hunter Generations Ultimate.