Mi Ru is a Flying Wyvern that was first introduced in Monster Hunter Frontier G2. 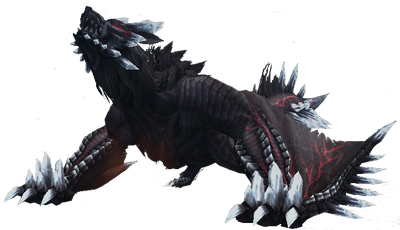 Mi Ru is able to shoot huge bursts of fire from its mouth that cover a large distance in front of it along with the ability to make crystals. These crystals are made from body fluids, similar to Akura Vashimu and Akura Jebia crystals, that are used to take away stamina from hunters and prey. If these crystals stay on a hunter or organism for too long, they will explode and cover a wide range around them.

Mi Ru's most well-known ability is its ability to change its appearance, shape, and size. With this ability it is able to change its fighting style, looks, and characteristics depending on its enemy, each transformation is indicated by a certain color or change on Mi Ru's body. It is able to do this ability by muscle contraction and muscle expansion in response to anger or when it feels its life is in danger.

Mi Ru possesses improved moves from Dyuragaua, Hardcore Tigrex, Hardcore Pariapuria and Nargacuga aside from its own original attacks.

The Mi Ru has so far only been found in the Nest Hole.

Retrieved from "https://monsterhunter.fandom.com/wiki/Mi_Ru?oldid=775811"
Community content is available under CC-BY-SA unless otherwise noted.