Midogaron is a Fanged Beast that first appeared in Monster Hunter Frontier G.

Midogaon are uniquely mutated/adapted Kamu Orugaron that sport fur that is a darker grey with white stripes and patches, as well as the tuffs and mane being red alongside the nose, quills and claws. Midogaron is also typically larger.

Lacking the ice and wind breath projectiles of Kamu Orugaron Midogaron makes up for these losses with fire breath and his well known extreme bursts of speed. His speed is so great that he appears to vanish from sight when enraged leaving only hairs and a burning hot orange dust from his starting point.

The majority of his attacks are improvements to Kamu and Nono's attacks and some extreme new ones. New ones include jumping into the air spinning then homing towards one of the hunters in the area to land on them no matter the range even if they are on the complete other side of a wide room, a unusually wide ranged lazy scratch attack when exhausted. a counter attack where if someone hits him he will appear to teleport to the attackers right for only a moment before appearing to teleport again jumping at his attacker or oddly the hunter who posted the quest, an attack where he charges a fireball in his mouth then appears to teleport behind whoever he chose to be his victim and the range of where this victim could be is unlimited as he will simply appear behind anyone anywhere in the same room and a attack where he jumps into the air at speed appearing to teleport > appears above a chosen victim > spits a fireball bellow > lands at high speed then repeats the jump attack followed by appearing to teleport to do a spinning landing on the victim.

Unlike Kamu Orugaron, Midogaron is a lone wolf and a very strong one at that. Though it is known that they bother Kamu and Nono pairs from time to time.

Midogaron has the unique behavior of attacking the hunter who posted the quest, sometimes relentlessly chasing after him/her even when other hunters attacking him. This may be a tactic to take out the leader to confuse other members of packs or herds of other creatures when hunting. Outside of this Midogaron shares the aggressive behavior that Kamu Orugaron has.

Midogaron have been found residing in the Volcano and Swamp regions. 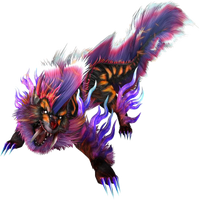