View source
watch 01:54
Arcane: League of Legends - The Loop
Do you like this video?
Play Sound

None
Mille (Japanese ミル) is an anime-original character in Monster Hunter Stories Ride On. She is a Rider who lives in Hakum Village and a fellow companion of Lute, Cheval, Lilia and Hyoro.

Mille is a serious and dedicated girl in the beginning of the story and has a direct attitude. After joining Cheval in his quest to free the world from the Black Blight by exterminating all infected monster, she became a more radical person only returning to her previous personality after being treated as a tool by Cheval. She became more cheerful near the end of season 1.

She alongside Lute, Cheval, Lillie and Hyoro, were students in Hakum Village's Rider School and graduated on the same day as her classmates getting an Aptonoth as her first monstie. She also shared a close relationship with Lilia and got a little sad when learned that she choose a different path instead of becoming a rider. After the Nargacauga's Incident in Hakum Village she joined her friends in their quest to free the world from the Black Blight.

Mille has blue eyes and purple hair. She wears a pink dress, navy blue pants and sandal. She also wears a scale like hair clip. In the second season, she grows her hair shoulder length and the clothes she wears are slightly different. She changes to a pink short sleeve shirt with a darker pink tank top on top, and light brown boots and bracers.

Before leaving Hakum Village the Chief gave her a Hunter's Dagger.

To help her friends fight against the threat of the Ebon Riders, she gets a Regios Amor Set and changes her Hunter's Dagger for a Cheda Blade Great Sword.

Brute Tigrex She obtained this monstie during her time with Cheval in their quest to become stronger and destroy the Black Blight. It is capable of performing the Kinship Skill Rock Smash.

Seregios In season two she changes her monstie for the second time and names it Legion. Whenever she rides Legion, she dons her armor and weapon made with Seregios's Materials. It went through the Rite of Channeling and gained Fire abilities. 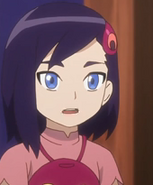