Minor Monsters are monsters that exist in-game but cannot be hunted, such as Endemic Life and Pets, or monsters that exist within the Monster Hunter Universe but are not present in-game, like the Extinct Monsters. Juvenile forms of existing monsters and also unnamed monsters can also fall into this category. 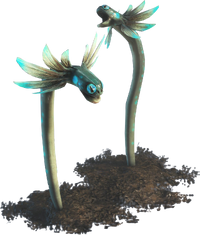 A large variety of smaller creatures introduced for the first time in Monster Hunter World:

Moofy is a pet that has been in Monster Hunter Generations, it's actually a baby Moofah.

Poogie is a pet pig that has been in almost every Monster Hunter game. It can be equipped with different costumes, and interacted with. In Monster Hunter: World, Poogie could be lifted up and taken to spots around Astera and Seliana to find secret treasure.

Cohoots are small owl-like creatures that were introduced in Monster Hunter Rise. They can be seen flying around Kamura Village, and one serves as a pet that can be interacted with, and equipped with different costumes.

Has no known picture but is seen as a item in games. Holding a Khezu Whelp drains a hunters health. Their only known use for hunters are to sell them for money or pickling them for food. 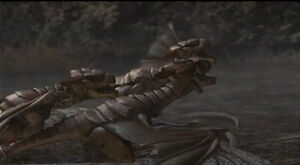 Only seen in Rathian's Ecology Video, they are the young forms of Rathalos and Rathian. They appear to have dull, almost metallic scales, suggesting perhaps that the colours exhibited by the adults of the species are not apparent immediately after birth. 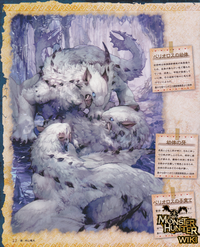 Barioth are born from live birth, and are raised by their mother in dens protected from the cold of the Tundra. 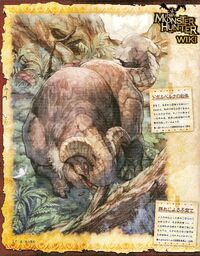 Not seen in game. After they are born, young Duramboros stay with their mothers, which form herds for their protection. 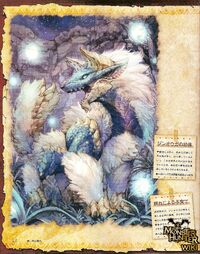 Not seen in game. Young Zinogre stay in packs of Zinogre. They have more fur on their bodies than adults do, which serves to protect their juvenile shells and expedite their storage of electricity. This fur sheds as the juvenile matures into adulthood. 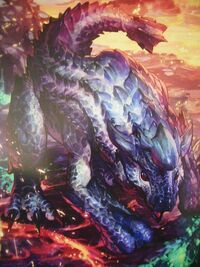 Not seen in game. Young Brachydios will live near their parents and their territory, yet the adults will not show any parental care. The hatchlings will also pick up slime mold left behind by adults but this can be dangerous as their hides are underdeveloped and can possibly be seriously injured or even killed by the explosions of the slime mold. 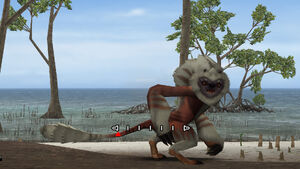 Known as Kokomoa through item names and info. It is the young form of Gogomoa. Just like HC Gogomoa, HC Kokomoa have yellow fur and eyes. It is impossible to kill or capture Kokomoa as defeating it or its parent makes it simply dig underground. Upon defeat of Kokomoa the parent Gogomoa will go into a red aura rage where its attack strength and speed are greatly increased but its body become extremely weak to damage. It is possible to acquire the very valuable fresh Kokomoa fur from carving the parent Gogomoa after its defeat.

This small insect is dubbed by players as either 'Poison Flashbug' or 'Poison Thunderbug'. It first appeared in Monster Hunter Frontier Forward.2. Upon defeat, much like Great Thunderbugs, it will drop a shiny, which will be a Flashbug, Thunderbug or an Insect Husk. At HR100 and G-rank they share the same items other Neopterons have, such as Neopteron Stingers LV1-3, Neopteron Juice LV1-3 and Monster Oil. At G-rank, they will drop Neopteron Poison Stingers, Neopteron Blade Shell and Neopteron Pheromones. 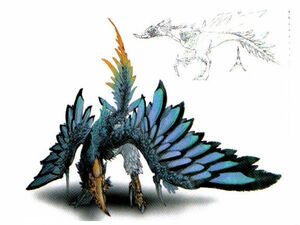 Originally a concept monster, Igurueibisu is now considered the first Bird Wyvern and is the ancestor of all Bird Wyverns. It was a predatory Bird Wyvern that hunted with its strong beak and talons. It is confirmed extinct. 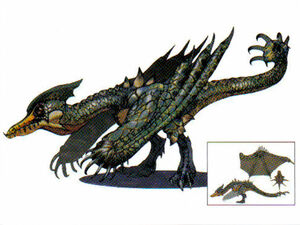 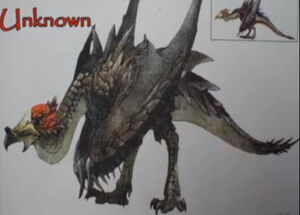 Once only a concept monster, Borudoru is the ancestor of all winged Bird Wyverns, and is believed by many to be a direct ancestor of Hypnocatrice because of its appearance. It is confirmed extinct.

Originally only a concept monster, Bajirisu is a relative of the Gypceros that instead of having rubbery skin had a hard shell on its back and tail. Unlike Gypceros, it couldn't use its crest to produce a flash. It was to Gypceros what Yian Garuga is to Yian Kut-ku, but is currently extinct. 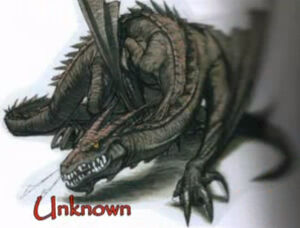 Originally a concept for Tigrex, It is now known as the ancestor of all Flying Wyverns though this possibly excludes Akantor, Ukanlos and Odibatorasu though they are believed to share the same ancestor if not originated from Wyvern Rex. Wyvern Rex wasn't capable of flying like Tigrex due to its small wings but Tigrex and it have similar spines. It is confirmed extinct. 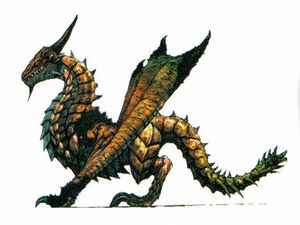 Originally a concept only. Sherureusu is the extinct ancestor of Rathalos and is a further evolved Wyvern Rex that split from Tigrex and is currently extinct. Interestingly, Sherureusu walked in a similar to fashion to Kushala Daora and was also an apex predator. 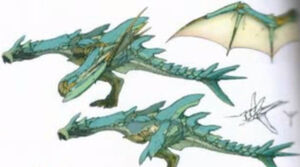 Originally only a concept, it is now known as a extinct relative of the Rathalos and Rathian. It had a strong heavy shelled body and is thought to have been able to walk on all fours like Tigrex. The heavy shell was actually all just one piece and this armor actually reduced its movability. 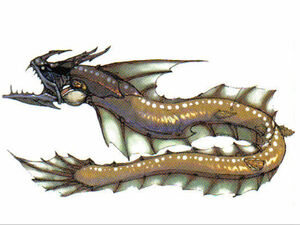 Originally only a concept, it is a very unique Piscine Wyvern that surprisingly is thought to still be alive but has made no appearances in games. It is requested by the Guild to kill these monsters on sight from them being able to do large amounts of damage like Elder Dragons. As a Piscine Wyvern it is related to Plesioth, Delex and Cephalos. 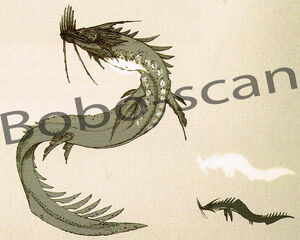 Originally only a concept monster, it is the serpentine-like Piscine Wyvern that is the ancestor of Lagiacrus. It is said to turn to stone as it gets older and older while alive and, theorized to have attacked a few ancient civilizations. They normally glow from their entire body but from petrification and parasitic shellfish covering their body, they now only glow from their stomach. Its unknown if its extinct or still alive.

Unknown Whether Canon or Not 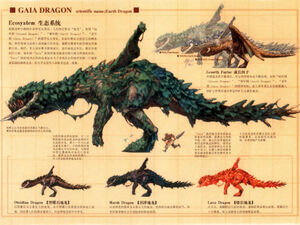 While young, a Gaia Dragon has a pair of wings. These wings are used to help it fly from environment to environment, in order figure out which environment it wants to spend its whole life in. The wings will slowly petrify as it gets older, becoming a huge pair of thorns. Once an environment is chosen, the Gaia Dragon will live in that area and will slowly adapt to that particular place as well. Depending on the environment it has chosen to live in and its diet, a Gaia Dragon's body will change to fit with the area as it grows older. Gaia Dragons eat a variety of foods, including poisonous plants, lava, obsidian, and meat.

Gaia Dragons are able to breath various substances from their maws depending on their diet and environment, and petrified skin is known to fall off as they fight, crushing foes. Gaia Dragons will even use their environment to their advantage in fights. These Elder Dragons are rarely seen by humans due to how well these beasts camouflage in their chosen habitats, especially the forest species. It is recommend to not look for these Elder Dragons due to their ability to seriously wound and even kill most foes, including the most experienced of hunters. They are even nicknamed the Jaws of Death, since meeting one guarantees almost immediate death.