Mizutsune is a Leviathan first introduced in Monster Hunter Generations.

Like most other Leviathans, Mizutsune has a long, slender body. However, it is one of the few Leviathans to actually have fur on its body. This dark purple fur covers its chest, underbelly, legs and tail. Its scales are light colored and resemble those of a fish. Its head has a long snout and is beautifully adorned by many fin-like appendages. These fins are pink with yellow markings, and they can also be seen on its back and tail. Its feet are said to be quite different from other Leviathans and allow Mizutsune to move swiftly on land.

Mizutsune is able to breathe bubbles at its enemies and able to produce these bubbles in its fur. These bubbles inflict bubble blight, which hinders movement. It can also fire pressurized jets of water from its mouth, much like Plesioth.

Mizutsune isn't very aggressive towards hunters. However, males have been known to go berserk during the mating season, attacking anyone who comes across them. This rage is the reason hunters are requested to hunt them.

Mizutsune has been seen inhabiting the Misty Peaks and Primal Forest. 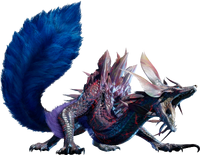