Molten Tigrex are Flying Wyverns and a Rare Species of Tigrex introduced in Monster Hunter 4. 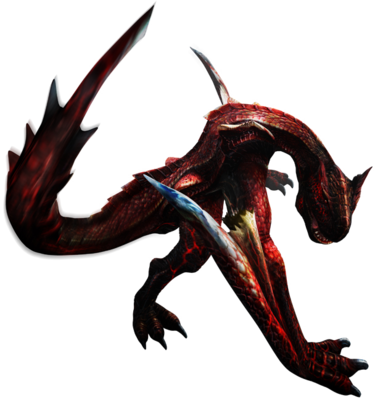 Molten Tigrex features a striking blood red coloration interspersed with bright blue spines and claws. It is slightly larger than the other two varieties of Tigrex.

It is capable of creating explosive blasts while charging, spinning and biting. In addition, its attacks can leave a target with an explosive powder that will explode over time. Interestingly, this species of Tigrex appears to have two rage modes.

In the first enraged state the veins of its head, forelegs and tail will become bright red and its speed will increase. Also, it will be able to use the Brute Tigrex's devastating stampede attack.

In the second enraged state it will start by using the Brute Tigrex's explosive roar, and its eyes will turn red. Veins on the wings, back legs, chest and tail base will also become visible.

It can now also, in combination with its attacks, spread explosive powder clouds and use the super roar in succession as well the lunge spin attack.

Little is known of the Molten Tigrex's idle behavior, but it can be assumed that it is highly aggressive and fierce towards those that encroach upon its territory.

It can only be found in the Tower on the Tower Summit, possibly due to the cool climate and abundance of large prey in the surrounding area.

Retrieved from "https://monsterhunter.fandom.com/wiki/Molten_Tigrex?oldid=818487"
Community content is available under CC-BY-SA unless otherwise noted.